Welcome to our Memorials pages, where all our beloved furbabies can be remembered with love.

These beautiful souls are all dogs which have lived as Sanctuary Dogs with K9 Crusaders. Many have been neglected, abused or mismanaged to an extent where they needed the security and stability that the kennels provide. They are all our K9 Family and have a very special place in our hearts. 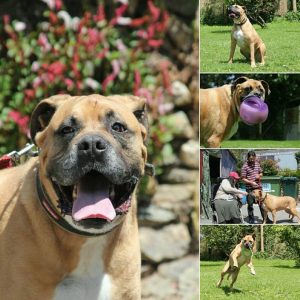 MALACHI…forever young…and seemingly indestructible..
His expression always gave the impression he should have a butterfly perched permanently on the end of his wrinkled nose.
Shortly after his arrival, he needed a cruciate operation, sailing through as if the surgery was a minor affair. His irrepressible streak was to become a feature of his personality. Malachi just wanted to have fun.
We were overjoyed when he left us to go to a home of his own, and devastated when his family broke up, and he came back to us.
The Malachi that returned was older, and sadder, and rather overweight. We had another home lined up, but within days his other cruciate went. We saw him through the operation, and saw the old Malachi come shining through. For a week, all went well, then he seemed to lose the progress he was making. Back at the vets, the menisci were found to have come loose. He had them removed, and off we went again, Mally seeming totally unruffled and unconcerned, in fact he loved all the attention, and swiftly became a great favourite with the lady vet nurses. Mal was what you might call ‘selective’ in his choice of male friends.
The leg made great progress, but Mal didn’t. He became listless, and started losing weight.
Back at the vets, we were shocked to hear confirmation he had a tumour, growing between the muscle and the lining of the intestine. The vet operated, hoping he had removed all of the mass with clearance.
Malachi, typically, was totally unconcerned by the surgery, and clearly feeling better, set out to enjoy life again. We were told only time would tell if the cancer was going to return.
Within days of his abdominal surgery, and despite following all recommendations, he bloated. We rushed him, swelling before our eyes, to the out of hours vet, where we kissed him goodbye, every second seeming like an hour as he blew in front of us. Few dogs survive bloat. Hardly any large dogs survive bloat.
We couldn’t believe it was going to end this way, after all he had been through.
Mally, however, had other ideas, and we were shocked, and elated, to get a call to go and collect the big fella.
And there he was, totally unconcerned.
We however, were concerned. The vet told us she had found a lot of ‘seeds’ in his abdomen, significant in the presence of cancer.
Mally took a while to heal after the bloat surgery, as there was so much scar tissue.
He healed, seemed well, and gained weight. Could Mally have cheated death yet again?
We had to remind ourselves he was 10 years old as he galloped around the field, leaping and bucking in typical Mally fashion.
Then, the familiar weight loss, nausea, listlessness. A scan confirmed several tumours. Inoperable. We loved him. Cared for him. Fed him chicken and assorted goodies as and when he fancied eating. He joined Kez, Arthur and Grace next door. Grace was rather taken with the handsome stranger. Arthur uncertain, but like Mally, two old codgers who likely agreed to disagree.
The end came swiftly. He was so special, and so, so loved…

← Back to RAINBOW BRIDGE MEMORIALS

If you wish to have your beloved pet added to our list of memorials then please email us at k9crusaders@btinternet.com quoting “Rainbow Bridge” in the title. Please feel free to add a photo, date and any message you would like included.